Your Source for Butter News

March is officially here!  And even better news, Women’s History Month has officially commenced!  In 1978, Women’s History Month began in Sonoma, California, when there was a week dedicated to celebrating women and their contributions to history and society.  As the years went on, the idea of celebrating women became more popular and rapidly spread to communities throughout the nation.  Eventually, the week-long celebration for women transformed into an entire month.  As it should be, are we right, ladies?

At Minerva Dairy, we are incredibly grateful to have a month dedicated to women’s accomplishments because our history is rich with strong successful women.  At 125 years and America’s oldest family-owned creamery, each generation at Minerva learns from the generation that comes before them.  We pride ourselves on the passing down of generational wisdom because this is what keeps our company growing.  In honor of the month, we’ve dedicated this blog to speak about two of the most pivotal women in Minerva Dairy’s history who have shaped it into the successful company that it is today.

After inheriting Minerva Dairy from her grandfather, Lorraine and her husband, Delbert L. Mueller, moved to Minerva, Ohio, in 1939.  When they arrived, Lorraine was surprised by the facility’s disrepair, as it was completely dilapidated.  However, she managed to bring the facility back to tip-top shape while simultaneously ensuring that the city of Minerva benefited from their presence.  Even more impressive: she did this while not being a native English speaker and during a contentious time in world history.

In a time prior to World War II, speaking in German was extremely unpopular in America.  Raised in a German-speaking area of Wisconsin, Lorraine and Delbert did not speak any English but knew that they had to learn how to speak English quickly to ensure acceptance from their community.  So, they did just that.  To further engage themselves into the community, they donated the lands surrounding the cheese and butter facility to the city for a park.

Lorraine’s tenure at Minerva Dairy was a hectic and stressful time for both the company and in history.  During World War II, dairy products were rationed, and Minerva was always packed with people awaiting their quota for the week.  At this time, Minerva bottled milk, made ice cream, and produced cheese and butter.  Even during tumultuous times, Lorraine helped shape a generation of better butter fans with the highest-quality product.  Cheers to you, Lorraine!

Today, Minerva operates under the lead of Venae Watts and her brother, Adam Mueller.  Specifically, Venae serves as the Secretary and Treasurer of the company.  As co-owners, Venae and Adam secured positions in the company at young ages, following their father’s (fourth-generation) footsteps.  Butter making is core to who they are, and from childhood, they were taught that family and butter come first.  Venae grew up surrounded by butter, so much so, her memories of opening Christmas gifts are in the dairy while her father unloaded milk trucks.

Today, Minerva Dairy is a leading butter company, serving consumers nationwide.  While Venae has put her spin on things, she has remained true to Minerva’s traditional butter-making process and continues to instill the same values held by the generations who came before her.  With 26 years working within the family business, she has played a pivotal role in leading the sales team to continued success and growth while simultaneously helping to navigate Minerva Dairy through the ever-changing food industry.

Recently, under Venae’s direction, we celebrated our 125th anniversary with the rebranding of our products.  With a new logo and packaging, Venae made sure our new look was eye-catching and emphasized stylized retro graphics and a modern character so that Minerva Dairy products are easily spotted on the grocery store shelves.  After all, we want to attract all the butter geeks out there to try our better butter.

After 125 years of bold and butter-obsessed women, we’re looking forward to celebrating the next generations to come.  Here’s to you, women! 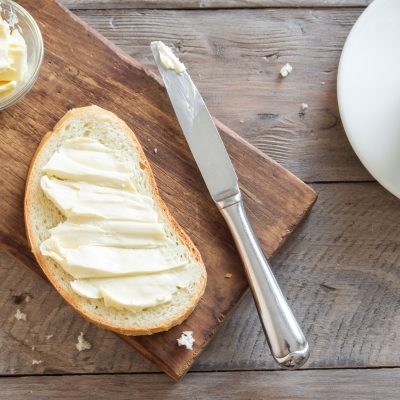 You’re Not Butter Obsessed Unless You Do These 10 Things

Grandma Lorraine always used to say, “There’s not much in … More

5 Tips on Working in the Kitchen with Butter

My family’s appetite for butter is second-to-none. That’s why I’m … More

How Is Better Butter Made?

Ever wonder how better butter is made? As America’s oldest … More

Is Butter Bad for You? Myths vs. Reality

In the Minerva family, we know that butter is better. … More