When many of us think of miso, there’s one thing that comes to mind: soup. Hot, savory, miso soup, an excellent starter for a perfect Japanese meal. Think beyond that familiar rich, salty flavor, though, and miso has so many uses in cooking – including in this five star miso buttered noodles recipe from our friends at Cake n’ Knife.

We’ll admit, the thought of cooking with miso is a little intimidating. It’s very potent, and a little goes a long way. However, when we test-drove this recipe from scratch, we learned that Cake n’ Knife found the perfect balance of butter and miso to make these noodles pretty darn spectacular.

Like many things we now know and love, miso had a completely different role in the past than it did now. Miso first appeared in Japan around 1,300 years ago, brought in by Buddhist priests. Miso, however, didn’t originate in Japan, but in China, and it wasn’t even used as a flavor so much as a food preservative.

Yes, you read that right. Rather than using miso to make meals better, practical people were using raw soybeans, salt, and even grains to make miso, which they’d use to preserve all kinds of perishables, especially during hot months.

In Japan, however, miso immediately became a huge hit – and a real sign of wealth. For those in the upper class, miso was a sign of status. It was made with white rice – something considered expensive and decadent at the time. Miso also became a big part of the samurai warriors’ diet.

Meanwhile, the people in the cheap seats – the farmers and field hands – weren’t allowed to use the fancy white rice they harvested to make miso. Instead, they made their own, using millet, barley, and even broken rice they couldn’t sell with the harvest.

Perhaps the most interesting historical tidbit is how valuable miso became as a currency. When times were bad, the Japanese actually traded miso for food and other items. In fact, miso is so entrenched in Japanese culture, there are at least 1,000 producers of miso in Japan today, many making white miso, which is known for having a slightly sweet flavor. Other producers make miso from different kinds of grain, like barley.

Today’s miso is a universal favorite. It knows no class. It knows no cultural boundary. It’s happily used in meals far beyond Japanese fare, including this delicious recipe that marries the savory flavor of miso with the rich texture and smooth taste of high-quality butter.

Why these noodles need high quality butter as a base

Be honest: How many times have you gone to the market, grabbed the cheapest butter you could find, and used that poor-quality butter in your recipes and meals? Believe it or not, not all butter is alike, and low butterfat butter can take a solid meal and make it into something totally ordinary. Who would want that?

This is why, when we made these miso buttered noodles, we knew the only butter that would work would be our own – from the small batches we make at Minerva Dairy. Over six generations, we’ve become the oldest family owned creamery in America, but we’ve also done something else – perfected a recipe for butter, using 85% butterfat – far above most of what’s out there.

So, with this recipe, go with gusto. Cook your pasta to al dente level – still firm when you bite into it – and coat it well with the mixture of butter, white miso, and parmesan cheese. Add a nice piece of protein to round out the dish – a steak works quite well – or just dig into the buttered noodles on your own. You’ll love them either way!

Our family, including our beloved Grandma Lorraine, who famously told us that “there’s not much in life that can’t be made better with butter,” has made developing the perfect batch of butter our family legacy. This goal is more than 125 years in the making, a passion passed on from generation to generation, including our children, who make up generation six.

The end result is a line high butterfat butter in multiple, dreamy flavors, from sea salt butter to the garlic herb variety.

You can grab the rolled version of our butter — or the classic sticks you’ll often find on store shelves — from your local market or specialty store, by using our location tool. 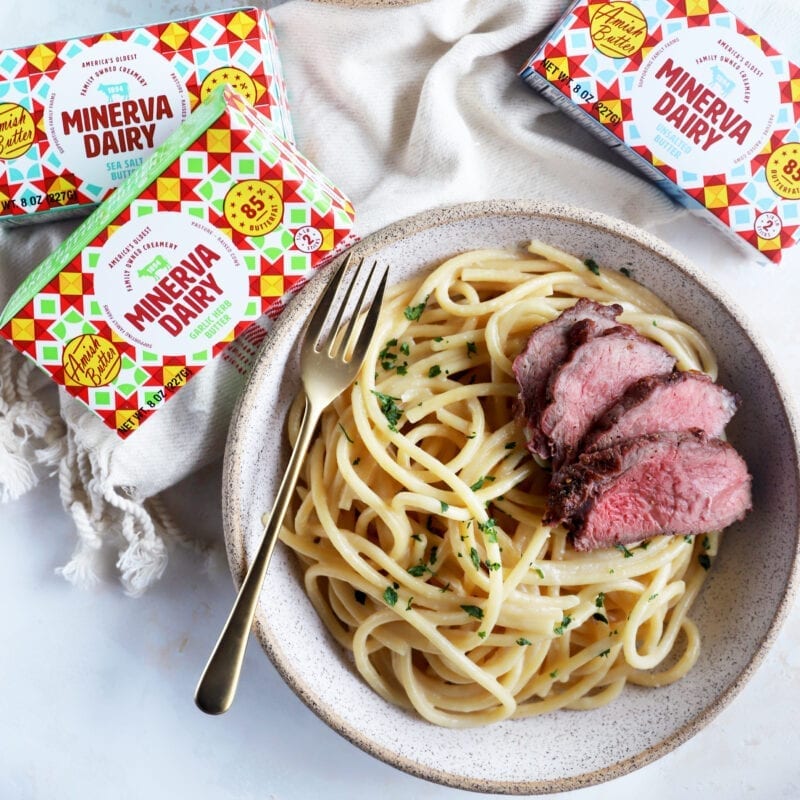 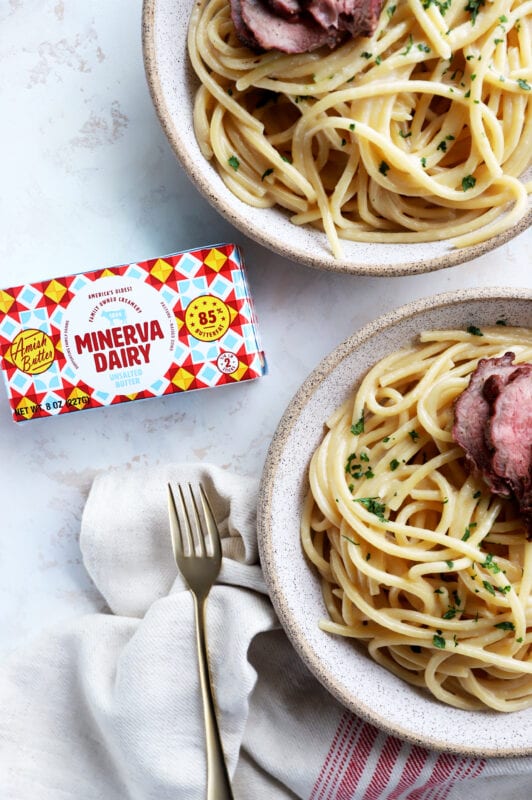